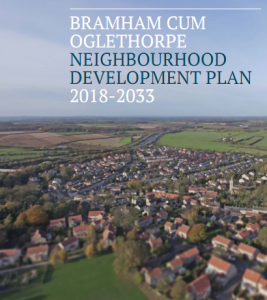 Click here to read the Plan online as a Flipbook

Leeds City Council appointed an independent Examiner; Christopher Collison BA (Hons) MBA MRTPI MIED MCMI IHBC, to review whether the plan meets the Basic Conditions required by legislation and whether the plan should proceed to referendum. The Examiner’s Report concluded that the Plan meets the Basic Conditions, and that subject to the modifications proposed in the report, detailed by the Bramham Neighbourhood Plan Decision Statement (published 21st December 2018), the Plan should proceed to a Referendum. The Examiner’s proposed modifications were made to the draft Plan in advance of the Referendum.

A referendum was held on 14th February 2019 and 94.3% of those who voted were in favour of the Plan. Paragraph 38A (4)(a) of the Planning and Compulsory Purchase Act 2004 (as amended) requires that the Council must make the Neighbourhood Plan if more than half of those voting have voted in favour of the Plan. Leeds City Council is not subject to this duty if the making of the Plan would breach, or would otherwise be incompatible with, any EU obligations or any of the Convention rights (within the meaning of the Human Rights Act 1998).

The referendum held on 14th February met the requirements of the Localism Act 2011; it was held in the Bramham Neighbourhood Area and posed the question:

‘Do you want Leeds City Council to use the Neighbourhood Plan for Bramham to help it decide planning applications in the neighbourhood area?’

The count took place on 15th February 2019 and greater than 50% of those who voted were in favour of the Plan being used to help determine planning applications in the Neighbourhood Area. The results of the referendum were:

This decision statement can be viewed on the Leeds City Council website and the Bramham Neighbourhood Plan website:
https://www.leeds.gov.uk/planning/planning-policy/neighbourhood-planning/bramhamcum-oglethorpe-neighbourhood-plan